It’s my pleasure and privilege to introduce you to a set of pieces combining my three favorite media: words, music, and film.  The words are by Pablo Neruda, and the set of pieces, Questions, are by the brilliant composer and instrumentalist, Ray Luedeke.

Here are Ray’s notes about his work:

Pablo Neruda, the Nobel prize winning Chilean poet and political activist, died in Sept. 23, 1973, just 2 weeks after the elected, socialist government of Salvador Allende had been overthrown in a military coup, orchestrated by the American CIA. The cause of death? Possibly complications from prostate cancer, possibly poison, administered by an agent of General Pinochet.

Questions (Las preguntas) for flute, viola, double bass, and speaker (optional) was inspired by Neruda’s poetry and uses as its text verses from the poetry. It was commissioned by RAM (Random Acts of Music), a Toronto based group, and was first performed there in 2009.

Watch and listen to Questions by Ray Luedeke here 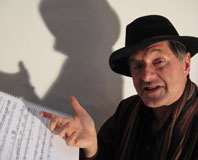 Ray Luedeke, one of the leading composers in North America, was born in New York City. He attended the Eastman School of Music, the Vienna Academy of Music, and Dartmouth College, where he studied with George Crumb. His output is extensive and varied. It runs the gamut from entertaining theater pieces for children, through a long list of sophisticated solo and chamber music to colorful, carefully crafted pieces for orchestra.

Recordings of his music include Shadow Music with the Louisville Orchestra, The Transparency of Time with pianist Andre LaPlante and the Winnipeg Symphony, The Moon in the Labyrinth with harpist Judy Loman and the Orford String Quartet, Brass Quintet  with the New Mexico Brass Quintet, Circus Music  with the Hannaford Street Silver Band, and Ah, Matsushima! with violin/marimba duo Jacques and Michael Israelievitch.  Quartetto Gelato has recorded Ray’s brilliant arrangement of Maurice Ravel’s Le Tombeau de Couperin and has performed it worldwide.

Purchase score and parts for Questions from
The Canadian Music Center
The American Composers Alliance
or
from the composer: rayluedeke@gmail.com