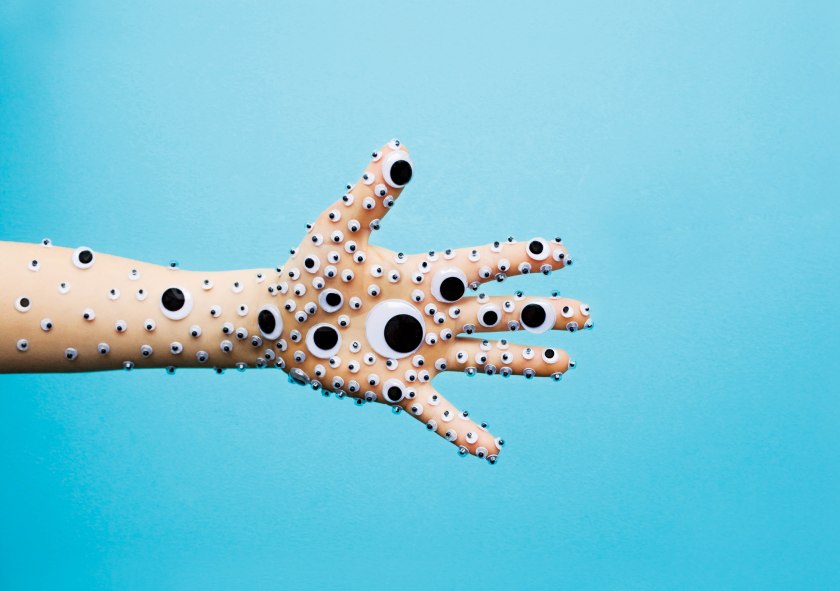 The other night, I watched as a TV food critic led cameras into the kitchen of a trendy new restaurant.

His review of the meal had been rhapsodic, spread over an array of dishes, which he lustily devoured. And, I  thought, gee, I’d like to try that place.

Then he went into the kitchen to talk to the chef—a young man who was clearly thrilled by the attention, his new star-status.

Being the food freak I am, I waited, pen in hand, for the reviewer to repeat the restaurant’s name and address, both of which I’d failed to write down during the opening. Yes, I was smitten, and ready to make a reservation the minute I had a number, That is, until the chef, while demonstrating how he prepared a signature salad, plunged both of his bare hands into the bowl of greens and other ingredients, and fondled them…repeatedly.

The food critic didn’t even blink. He gave the restaurant four stars.

I, on the other hand, made sure to write down the name of the restaurant so that I would never make the mistake of going there.

Maybe I should have sent him salad tongs, too. 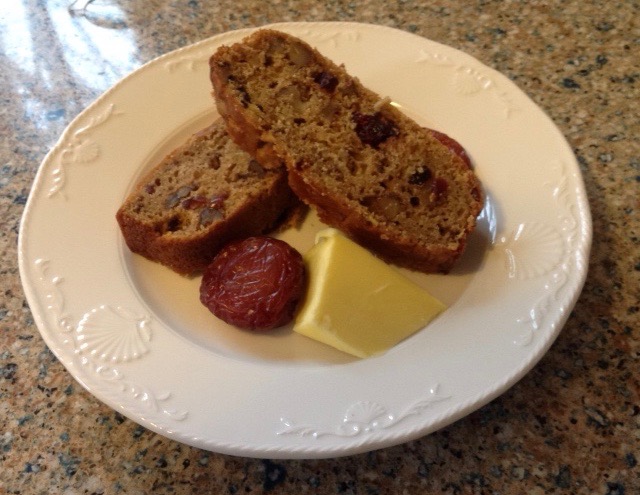 I created this tea bread so that it would be food for strength and comfort—loaded with antioxidants, yet sufficiently sweet. Indeed, my husband says he can’t think of this as bread, as it seems more like dessert to him. I, on the other other hand, eat it for breakfast. The recipe is open to improvisation. If you try it, and experiment with your own additions/changes, please share!

To this mixture add:

Blend well into liquid mixture. The batter should have substance, but not be stiff.

Pour into prepared pan and bake for @50 minutes. Test with toothpick to see if it’s done. Cool in pan on rack, then slice when still slightly warm and slather with chevre or your favorite nut butter.

(Many thanks to Michael Seidel and Nancy Smith for sharing this on their blogs!)

It wasn’t an unpleasant day. It wasn’t raining or snowing, extremely cold or hot; there was nothing that would make a short chat with a friend, or wait for a green light uncomfortable. Yet no one stopped. I suppose you could say that people had somewhere to be—work, school, appointments. People are busy. Yes, they have schedules. But they rushed by as though they were already critically late to wherever they were going.

The woman was on the sidewalk, on her back, unconscious, twitching. Her clothes—jeans, untucked shirt, light jacket—were loose around her. Her handbag, soft, slouchy, not terribly full, was at her side.

I was headed somewhere, I’m sure, but because of the way I was raised, because of ancestral ghosts who’d been bypassed, overlooked, ignored…rationalized to dust, I stopped and crouched beside her, spoke gently, pulled her purse close to her body where I could keep an eye on it. No one had cell phones then. Help wasn’t at people’s fingertips. But this was a city street; I knew it couldn’t have been far away. So, I looked around for a cop, hesitant to leave her to the concrete, apathy, but as I was looking, a gentleman joined me. Can I help?  He had a kind a face.

I told him I’d stay with the woman if he would find a policeman, or go into a store and call 9-1-1.

He was about to do that when the woman suddenly came to. She was disoriented and frightened. I tried to reassure her, explain that she’d been unconscious, and the gentleman was going to get help for her, but she panicked and ran off, leaving her purse on the ground.

Neither the gentleman nor I wanted to leave the spot, understandably. We didn’t know each other, couldn’t trust each other with the woman’s belongings.

Within a minute or so, a policeman walked by. We stopped him, explained, gave him our names, the direction the woman had gone, and her purse. He promised to look for her, see that she got help.

I think about that woman often, a woman whose name I don’t know. Perhaps I should have opened her purse, but in that moment, doing so felt like an invasion, an exploitation of vulnerability. And when the officer showed up, it became unnecessary. But I still wonder if she’s okay.  And I wonder about the hundred or more people who passed her on that comfortable day, and the ease with which they ignored her.